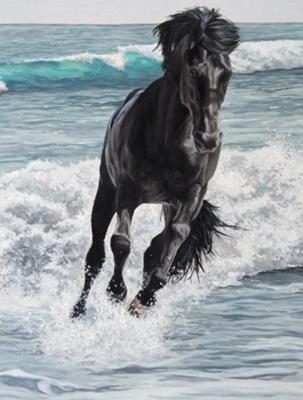 I wrote this poem at least two years ago for a school assignment. I never thought it’d be used for anything, but I decided to place it in my first book, ‘Zambia’.

On the night of the new moon at the midnight hour,
Under cover of darkness,
The Black Stallion came with sleek, silent power.
No one knew of his being there because of his quietness.

He is the horse most wanted by all of men,
As quiet as a shadow and as black as the night.
He is as wild as a mountain lion with the speed of ten.
He runs like a river in full flow with an instinct to fight.

Of the great horse no body knows,
For his speed and beauty have kept him wild.
I have seen him fight his enemies and keep his colts on their toes,
But with his young fillies he is sweet and mild.

This wild shadow which no one has caught
Is hunted daily by men in saddle and on foot,
But none shall catch him for his is a freedom that can?t be brought:
He is the wildest of all horses but none can ever be taught.

The Equestrian World
$78.50
Buy on Amazon
Bestseller No. 4