Me and my Drew 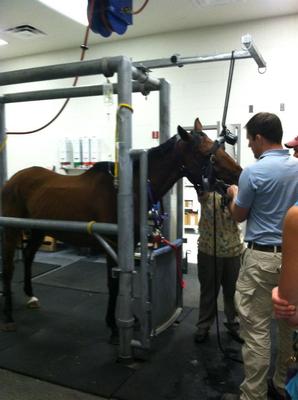 Drew at the animal hospital 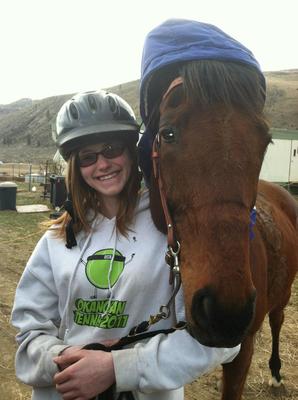 Tolerates a lot of things

It took a while to get used to my energetic Thoroughbred who loved to gallop down the dirt road and stretch his legs. But getting used to him was the best days I spent bonding with a horse. Drew, I soon learned, was and still is afraid of cows and goats, but if he is in a gallop and focusing on moving forward then he is fearless. I cannot say that I have always been fearless around him, but it wasn’t him who made me afraid: it was a fear of losing him.

In August of last year Drew gave me a big scare: he had choke! The local vet had botched his teeth floating and it had caused him to get grain and hay lodged in his throat. He was tubed and hydrated the next day before we started the trip to the animal hospital that took a day to get there. They took care of him and got him fixed up, but I don’t think I had ever cried so much in my life. The thought that my horse might not make it kept going through my mind and I don’t think I could live without my noble steed. After that I moved into the trailer that was on the property so that I could be there and take care of Drew. He is still on the mend to make up for the weight he lost, he is getting better.

I don’t think I could ask for a better horse then Drew. He is a jealous horse who does not like it if I am tuning up horses and not riding him. But he always knows how I am feeling and has never thrown me. On occasion though he has tried to eat the book I read to him. He is my stargazing buddy, jogging partner, and companion.


Join in and write your own page! It’s easy to do. How?
Simply click here to return to My Horse.

The Equestrian World
$78.50
Buy on Amazon
Bestseller No. 2