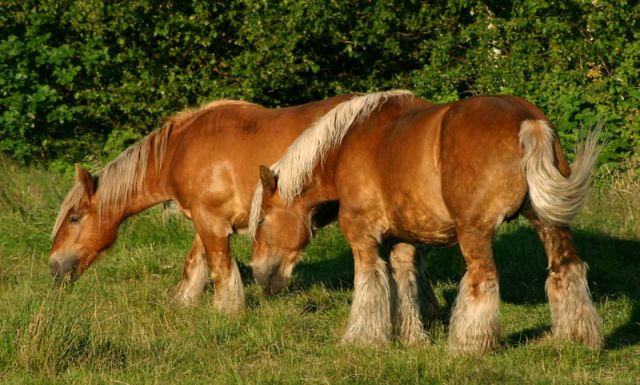 The Jutland horse can easily be mistaken for the British Suffolk Punch. Except for the gorgeous feathering on
the lower part of the leg, the Jutland and the Suffolk Punch do look incredibly similar. However, this is not
too surprising when you take into account the fact that the present day Jutland was hugely influenced by the
Suffolk Punch blood through the stallion, Oppenheim LXII, who was in stud in Denmark during the 1860s.

Though Oppenheim LXII  wow, what a mouthful!  played a big part in the breeding of the Jutland horse, the
breed goes back much farther than that. Heavy, draught horses were bred in the Jutland Peninsula as far back
as the twelfth century. During that time, those horses were in great demand as mounts for war. With the
combination of enormous strength and a willing nature, the Jutland horse was the perfect mount for the
knights of the Middle Ages.

Though Cleveland Bay and Yorkshire Coach Horse blood was said to have been used in creating the Jutland,
it is definitely the Suffolk Punch who played the leading role. Nowadays, even though the use of machines
has reduced the numbers of the Jutland, you can still see them pulling drays in the cities, at shows or 
occasionally  working on farms.

The Jutland, though heavily built and very strong, is not an incredibly tall draught horse. Standing from
15 to 16 hands, it comes mainly in dark, honey-coloured chestnut with a light mane and tail.

Return to Home
from Jutland Horse