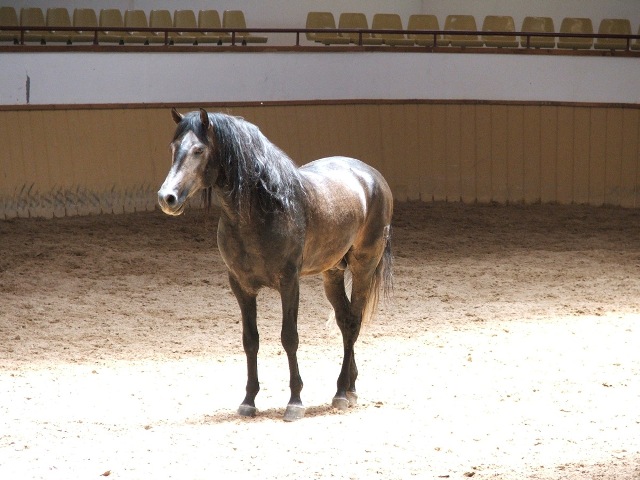 With breeding that goes back to Spanish and North African bloodlines, the Andalusian horse is not a very fast creature, but has excellent gaits. Andalusians have long, wavy manes and tails and are usually bay, light grey or dappled grey in colour. The heart of the Pure Spanish Horse world is in Andalucia, southern Spain, and ‘Andalusian’ is a term that is generally used to describe a Spanish-type equine.

They also come in an odd greyish purplish colour called mulberry. The Andalusian is a very quiet and reliable equine which has made them very popular throughout the world. In America there is a registry for Andalusians, which includes Spanish/Portuguese crosses or those which can show Spanish or Portuguese blood. In Europe and elsewhere in the world there is no such register and Andalusian is not recognised as a breed.

The Andalusian is a good all-rounder, but are especially good at a special form of dressage called the High School or haute ecole. They are not the tallest of horses, but they have very compact and muscular bodies. They stand from about 15 to 15.2 hands. Andalusians had to survive some pretty tough times to still be living as a breed today. Their survival is mainly credited to the Carthusians who became very good at horse breeding and keeping the breed pure.

The photograph on this page is used with kind permission from www.pure-spanish-horse-spain.com which is a website well worth the visit if you would like to find out more on Andalusian and another Spanish horse breed, the Lusitano.

Return to Home
from Andalusian Horse