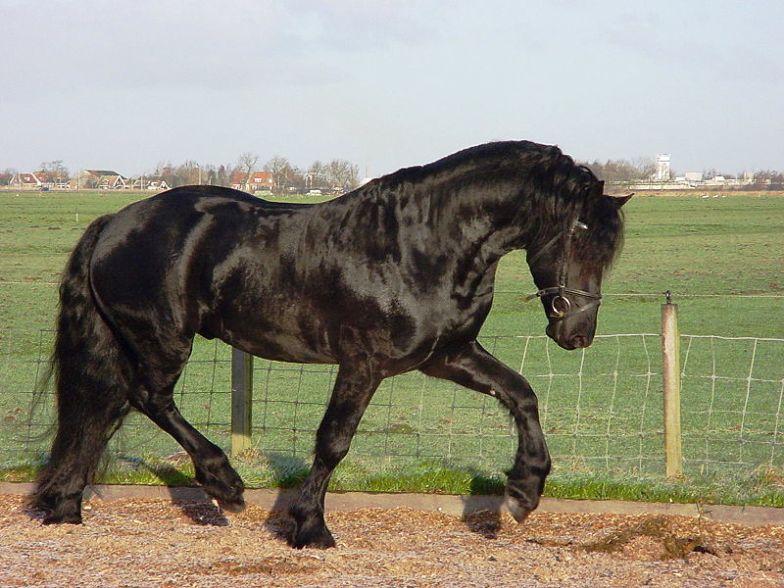 The Friesian horse is one of oldest ad most elegant horse breeds of Europe. For centuries it has been used to
influence other breeds such as the Oldenburg of Germany and the Dales and Fell ponies of Great Britain.

The homeland of the Friesian horse is the north of the Netherlands, Friesland. The modern Friesian is supposed
to be descended from an older Cold Blood Horse breed, whose remains have been unearthed in Friesland. The Friesian
has had many breeds influence it, including the blood of Eastern horses from the time of the Crusades and the
Andalusian from the time the Netherlands were under Spanish rule.

Because of the influences from these breeds, the Friesian is not only prettier and more lightly built than all
the other Cold Blood Horses, but has better gaits and is more comfortable for riding as well. However, it could
still work the land and be used to drive carriages.

In the nineteenth century, trotting became very popular. Breeders of the Friesian horse sought to improve the
Friesians active, high-stepping trot by out-crossing the Friesians to trotters. However, though this produced
brilliant trotters, the Friesian became even lighter than it was, making it next to useless at draught work.

By the time World War I came, the Friesians numbers were very low. They continued to drop throughout the wars,
but, during World War II, a lack of fuel made the farmers turn to the lightly built draught horse for their
farming. This caused the breed to once again become the legendary worker it had been.

Now, in the second half of this century, the interest in the Friesian horse has been revived. The Friesian is
very popular as a carriage horse and loved for its good temperament. Friesians are reasonably tall horses,
standing around 15 to 16 hands. They also only come in the colour black. Some Friesians may appear brown,
but they are always black.

Return to Home
from Friesian Horse