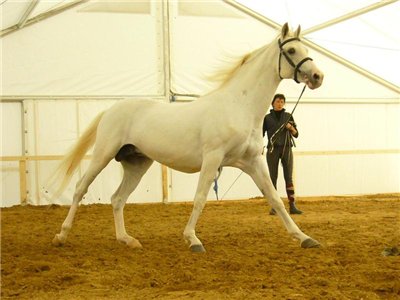 The Tersk horses bloodlines are based on that of the Strelets horse. The Strelets horses are part-breed Arabians
which were formerly bred at the Strelets Stud in the Ukraine. The Strelets hose was bred by crossing purebred
Arabians with high quality Orlovs horses, Thoroughbred horses and Anglo-Arab horses. The result of theses breedings
was a horse that looked like an Arabian, but had a bigger build than a purebred Arabian.

As the 1920s came, the number of Strelets horses dissipated. The few horses that did remain, including two stallions,
were taken to the Tersk Stud in hope of increasing their numbers. The mares were all bred to purebred Arabian
stallions and the cross-bred mares at the stud  including Strelets horses x Kabardin horses and Arabian x Don horses  were
bred to the Strelets stallions. Thirty years later, the descendants of these horses became the breed known today as
the Tersk horse.

The Tersk horse has inherited the general look and gaits of the Arabian, but it stands a bit taller. Usually different
shades of grey and white in color, the Tersk horse combines a kind temperament with a tremendous amount of energy,
making it a favourite for high-speed, high-tension sports and circuses.

Return to Home
from Tersk Horse