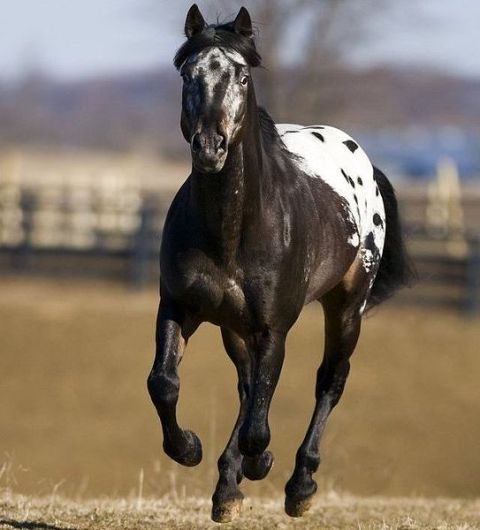 The Appaloosa horse is the most unusual equine in the entire world; its whole body is covered in spots which can vary in colours from white with black, brown or grey spots, to black, brown or grey with white spots; this sort of colouration is known as leopard spotted. There are other Appaloosas with totally black, grey or brown bodies except for their hind quarters where they can have a huge white patch with black, grey or brown spots on it. Horses with markings such as these are called spotted blankets. Certain Appaloosas have no spots at all, but despite this they are still counted as part of the same breed as their spotty counterparts.

This unique spotted marking can be traced back to the horses originally brought to the Americas by the Spanish Conquistadors. Spotted horses were highly treasured by the Nez Perce Indians, a tribe that dwelt in what today is northern Idaho, south-east Washington and north-east Oregon; allegedly they were the first Native American race to practice methodical horse breeding. The name of the Appaloosa is actually taken from the area known as Palouse country which is named after the Palouse River.

Tragically, after the defeat of the Indians by the United States Army in the late 1800s, the few Appaloosas that survived the massacre disappeared all over the country, and it was only in the 1920s that attempts were made to restore the Appaloosa. This led to the creation of the Appaloosa Horse Club in 1938, whose job it was to gather any records/historical data regarding the Appaloosa horses and their origins that the modern type might become standardized and that its history might be preserved.

As you probably guessed, the restoration of the Appaloosa was a phenomenal success and today it has become world-renowned and loved by equine enthusiasts worldwide. A diverse and mature type, the Appaloosa is a popular choice for all kinds of Western horse riding, for endurance racing, hunting and show jumping.

For Appaloosa offspring to be recognized as part of this unique type, at least one of their parents must be an Appaloosa, and the other can only be a Thoroughbred, an Quarter Horse or an Arabian.

The Appaloosa is a sturdy type and stand from 14.2 to 15.2 hands. Due to their spotty coats, they are not classified as a breed, but rather as a types as a breed of horse.

Return to Home
from Appaloosa Horse

The Equestrian World
$78.50
Buy on Amazon
Bestseller No. 4