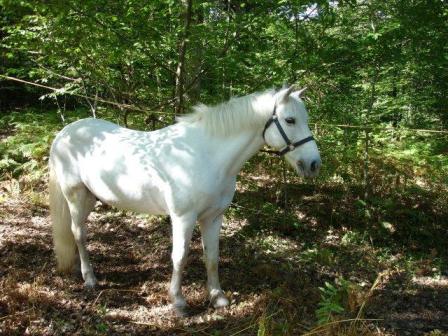 The Camargue horse is another old breed; it looks a lot like the ancient depictions of horses in cave paintings discovered in Lascaux, France, and older equine skeletons have been uncovered in south-eastern France had bear a striking resemblance to the modern-day horse. It is surprising, then, that the Camargue was only recognized as an official breed of horse in 1968.

As native inhabitants of the hostile Rhone Delta in France, the Camargue is a hardy and diminutive creature. It has been suggested that the Camargue was influenced at some time in its history by North Africa blood, possibly Barb or Arabian, although many of its original characteristics have been retained, mainly its heavy, square head.

The Camargue has been used as mounts by the herdsman (or guardians) of the fighting bulls that are commonly reared in this region of France. Despite the fact that they stand only at 13.1-14.1hh, these tough little horses are more than able to carry the weight of a fully grown man over difficult, marshy terrain on a day-to-day basis.

Some might refer to them as wild horses, but the horses of the Camargue are actually semi-feral. Each year they are rounded up for inspection, which includes the branding of the youngsters, the selection of suitable breeding stock and the gelding of those stallions who are unlikely to produce good offspring. The herds are a popular tourist attraction among the other wildlife of France.

Camargue horses only come in one colour: grey, although some may have lighter or darker shades depending on their bloodlines. This may sound boring, but throughout the years many a writer has been inspired by the presence of the semi-feral horses; poet Roy Campbell described them as ‘the silver runaways of Neptune’s car’ in his poem, Horses on the Camargue.

Return to Home
from Camargue Horse