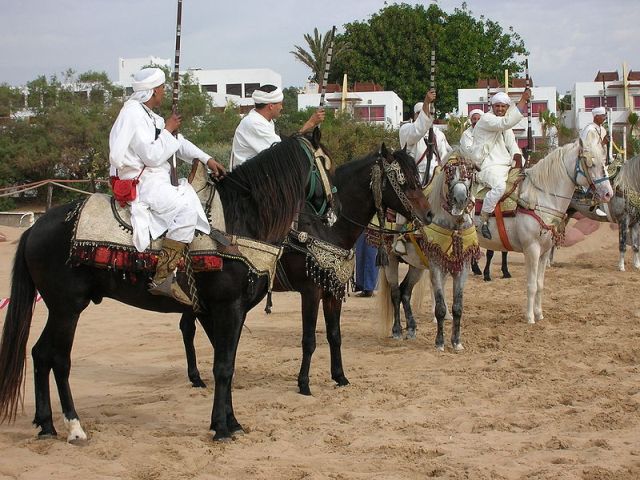 The true origins of the North African Barb horse are mysterious. The majority is split between believing that it is a breed older than the immemorial Arabian and suggesting that it is related to the Akhal Teke. In the present day, many Barbs can be found dwelling in the arid North African countries of Morocco, Tunisia and Algeria; these places previously formed part of the Barbary Coast (Barbary meaning non-Christian lands) and it is most likely that the Barb attained its title from this region.

Like its exotic counterpart, the Arabian, the Barb has played a huge role in the development and improvement of horse breeds worldwide. The spread of Islam brought the ancient Barbs to the lands of Europe; the first of these horses probably landed along with the first Muslim troops in Spain in the year of AD 711. The first European horse breed which the Barb was to develop was the magnificent Spanish Andalusian; even today the physical similarities between these two equines are apparent.

Many references throughout history have been made to various “Barbary” horses, in particular the Roan Barbary, belonging to Richard II, the King of England from 1367-1400. More Barb horses were brought to the Island’s shores in the sixteenth century when King Henry VIII imported several. In the following century, the Barb played a crucial part in the development and improvement of the most renowned breed of horse in the world, the Thoroughbred.

The Criollo and the legendary North American Mustang are two other horse breeds which show an obvious Barb influence. The Mustangs often have rather mixed blood as they frequently mingle with the local breeds such as the Appaloosa, but there are pockets of Mustangs which have remained relatively unchanged and still display a keen resemblance to their original Iberian ancestors. They are often referred to as “Spanish Mustangs” due to this likeness.

Despite the fact that the Barb also possesses the Arabian qualities of stamina, endurance and sure-footedness, it has not gained the vast recognition and appreciation that its striking relative has. This is no doubt due to the more attractive appearance of the Arabian, though it must be said that the Barb is definitely a handsome equine.

Barb horses are mainly black, brown, bay and grey in colour and most common markings such as socks and blazes are permissible. They generally stand between 14.2-15.2hh. During the exhilarating North African festivals (see the image above) they are known to show an impressive turn of speed over short distances.

Return to Home
from Barb Horse