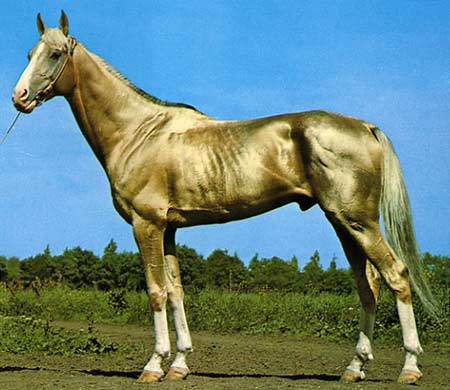 The Akhal Teke horse is a truly amazing and abnormal equine. It is also known as the Turkmen, which relates to the area of the world it comes from, that is, the deserts of Turkmenistan, a region to the north of Iran and to the east of the Caspian Sea.

It is highly likely that the Turkmen used a fair amount of Arabian and Persian blood in refining their Akhal Teke horses, but because of their incredibly isolated location, a minimal amount of traditional riding horse (such as Thoroughbreds and Cobs) blood was introduced. It was also due to this extreme region that the Akhal Teke gained its lean shape and great speed.

The Akhal Teke has a very slender conformation (as can clearly be seen in the picture above), with an elegant head and slim legs. They are often an odd golden sheen like a Palomino  just much, much brighter and more polished. But they also come in the colours of bay, chestnut, grey and black.

Despite the fact that their appearance is very striking, unusual and even beautiful, Akhal Teke horses suffer from numerous conformation issues. Their backs are very weak; their rib cages too shallow; their loins lacking in strength. Because of the desert’s heat, their manes and tails are very sparse and their skin is unusually thin, making them highly unsuited to life in colder countries such as the British Isles or most European countries. By far the worst of their defects is the long, elegant hind legs which unfortunately are often sickle-shaped and
cow-hocked.

This breed of horse is renowned for their devotion to their owners. This may be due to the method of training that a young horse was trained by. An Akhal Teke in training would be kept alone and treated unkindly by everyone but his owner. This made these horses become incredibly devoted, but with a slightly difficult temperament.

As one would expect, the Akhal Teke makes a fantastic endurance horse because of its incredible stamina and ability to perform on very little feed. They also are raced in certain areas, but only once they are two- or three-years-old. They have even been used in the development of other horse breeds.
However, though they can be used for general riding purposes, they are not recommended for young or inexperienced riders as they have a slightly difficult temperament and are rather spirited.

Akhal Teke horses are surprisingly good jumpers, unlike most other desert horses such as the
Arabian and Barb. They are rather rare, not the sort of horse you would normally see at a horse show or competition, especially in colder countries. They stand from about 15.1 to 15.2 hands, not very big, but they still are hugely agile and striking.