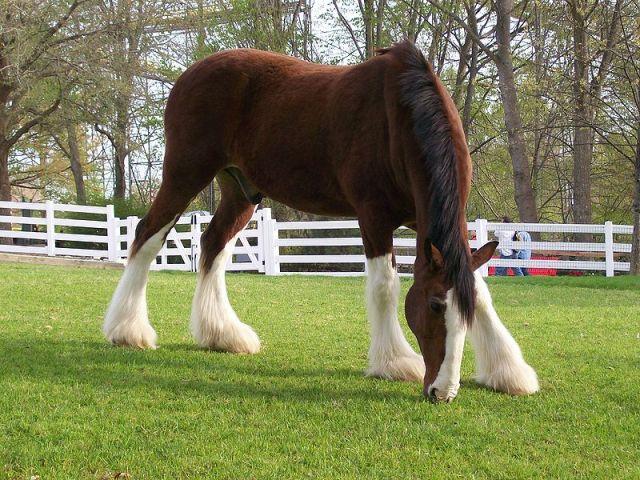 A Scottish breed, the Clydesdale horse comes from the Lanarkshire district, deriving its name from the former title of this region. The very first recorded use of the name ‘Clydesdale horse’ to describe the breed was at an exhibition in Glasgow, where they were originally used for agriculture, hauling coal and heavy objects.

Flemish stallions were imported to England in the mid-eighteenth century and crossed with the local mares. Among the resulting foals (which were considerably larger than the local stock) was a big black stallion; even today he is still unidentified by name. Handwritten pedigrees of these foals were recorded, and in 1806, a filly foal was born (she was later to be dubbed ‘Lampits mare’); her lineage traced back to the unnamed black stallion. Lampits mare was to become the ‘mother’ of the Clydesdale breed. One of her more famous foals – a colt called Thompson’s Black Horse, or Glancer – was to have a massive influence on the development of the Clydesdale.

The Clydesdale spread throughout all Scotland and even into northern England through an ingenious method: starting in the early 1800s, a system of hiring out stallions between the various districts of Scotland was established. The aim of this system was to improve the local stock. The agricultural improvement societies would hold breed shows in which the best-bred stallion would be chosen. His owner would be awarded a cash prize, and was then obligated to the stallion throughout the area that they designated in order that he might be bred to the local mares.

The Clydesdale was exported from Scotland to North and South America and other countries belonging to the British Empire in enormous quantities during the latter half of the nineteenth and early twentieth century; between the years 1884 and 1945, export certificates for more than 20 000 horses were issued! Clydesdale horses were very popular in Australia, having being first exported to there in the nineteenth and twentieth centuries. Between 1924 and 2008, more than 25 000 Clydesdales were registered in Australia. It is fondly known as ‘the breed that built Australia’.

Sadly, great numbers of Clydesdales perished under fire during the First World War. After the war, mechanisation spread, destroying the market for draught horses throughout England; the Clydesdale fell afoul of this, just like the lighter carriages horses such as the Cleveland Bay. By 1949, there were only 80 breeding males in England. According to a survey done in 2010, there are about 5 000 Clydesdale horses worldwide (4 000 in the Americas and Canada, 800 in the United Kingdom and the remainder scattered all over the globe).

The modern-day Clydesdale horse is still used for draught purposes (i.e. agriculture, logging, hauling, driving, etc.), but are also shown, ridden and kept for their owner’s pleasure. Famous Clydesdales include those which are used alongside the Shires as drum horses for the British Household Cavalry, and the legendary Budweiser Brewery Clydesdale driving horses which became symbolic of the brand after the end of the Prohibition era in the USA. It was essential in the creation of the Gypsy Vanner and was used in a brief and unsuccessful attempt to improve the Irish Draught during the late nineteenth century.

An enormous Cold Blood horse, the Clydesdale stands between 16-18hh and can weigh up to 1 000kgs. Having an active gait and an energetic personality, they are very elegant in appearance. It is a common misconception that they only come in the colour of bay, as roan, black, grey, chestnut, piebald and skewbald with extensive white markings also occur. The trademark of the Clydesdale breed is the gorgeous feathering of their lower legs, which when groomed properly looks absolutely fantastic.

Return to Home
from Clydesdale Horse