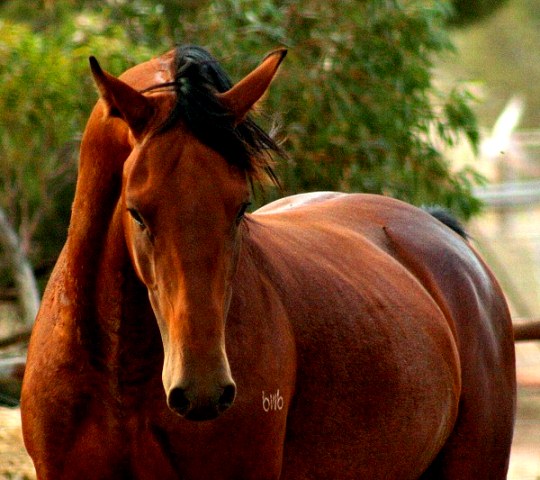 The Cleveland Bay horse is the most ancient English breed of horse, as well as the only horse to be developed in Great Britain that is not of the Cold Blooded draught group. It originates from the Cleveland district of snowy Yorkshire, having being bred there since the 17th century. In type (not in blood) it is most closely related to the Irish Draught.

The ancestors of the Cleveland Bay were first bred by the churches and monasteries of northern England during Medieval times; these horses were used to transport goods between the myriad of abbeys and monasteries. They were colloquially known as ‘Chapman Horses’, as merchants were called ‘chapmen’ in those days.

The development of the modern Cleveland Bay horse began with the importing of Barb and Andalusian horses to England. The Barbs came back with the affluent young men after their Grand Tour of Europe while the Andalusianswere given to the English royalty by the King of Spain. Many of these Spanish horses were seized by the men of Oliver Cromwell after the English Civil War; they made the stallions available to the local public for breeding, and thus the Chapman Horses were crossed with both Barbs and Andalusians. Later infusions of Barb blood were added when the breeders of the Cleveland Bay bought Spanish horses from the soldiers at Tangier or from the Moors.

By 1785 the Cleveland Bay horse had grown larger as a result of better feeding and had been developed by selective breeding into a more hefty ‘agricultural type’ of horse. The change in size was largely due to the demands for strength instead of speed as many of the horses were being used either on farms or the horrendous roads of 17th and 18th century England. The roads were bettered with time and so speed became more important. In the late 1800s, Thoroughbredand Arabian blood was added, making the resulting horses lighter; they were favoured as flashy coach horses for their powerful shoulders and arched necks.

The British Cleveland Bay Horse Society was founded in 1883, and the first stud book was published the following year. The 19th century saw the breed exported to a wide variety of countries, including Australia, South Africa, India and Russia. The Cleveland Bay was a particular hit in the USA; the Cleveland Bay Society of America was started in 1885, followed by the creation of the stud book in 1889. They were so popular that four Cleveland Bay stallions were driven in Buffalo Bill Cody’s Wild West Show.

The British were greatly impressed by the abilities of the mounted Boer soldiers of the Second Boer War, and thus they increased their stock of cavalry horses before the opening of the First World War. Many of the larger Cleveland Bays were used as artillery horses, and the losses were horrendously high. This event, followed by widespread mechanisation, the Great Depression and the Second World War, nearly caused the extinction of the breed; by 1962, there were only four purebred Cleveland Bay stallions in the UK.

An incredible versatile and attractive horse, the Cleveland Bay is used today for driving, hunting and light agricultural work. When crossed with Thoroughbreds, the resulting horses can be spectacular show jumpers. Back in the 19th century when show jumping was emerging as a sport, a Cleveland Bay mare called Fanny Drape was a huge star; it was said that she could jump over a 1.8 m (6 foot) stone wall with a rider on-board and a 2.3m (7.5 foot) bar while being jumped in-hand. The majority of the bay-coloured horses in the Royal Mews today are made up of Cleveland Bays.

The Cleveland Bay horse aided in the creation of the Oldenburg breed, as well as creating and improving the Hanoverian and Holstein. Along with French and Belgium draught horses, the Cleveland Bay was instrumental in the development of Russia’s Vladimir Heavy Draught horse. The modern Cleveland Bay is tall, standing a good 16-16.2hh. They are always bay, though the shades may differ from horse to horse; white markings are not permissible.