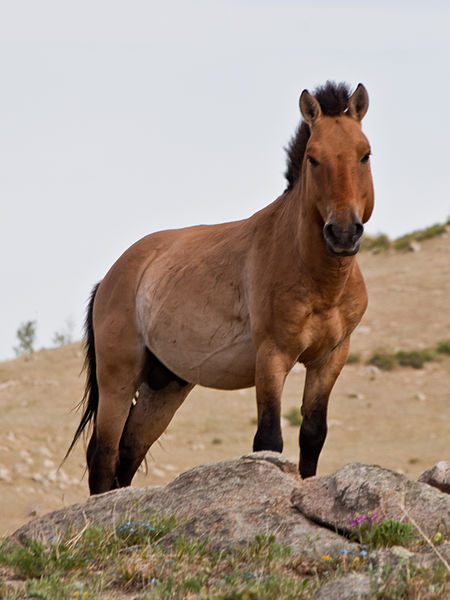 This species gets its unique name from the Russian colonel, explorer and naturalist, Nikolai Przhevalsky (1839-1888), who embarked on an intrepid expedition to find these rare horses of Mongolia which had been described to him in legends. Przewalski is the Polish spelling of his surname, and was given to the horses as their official title after he clear described them in 1881.

The Asiatic Wild Horse (as is another of its names) was first brought into captivity by Carl Hagenbeck in 1900, who captured many of those horses seen by Przhevalsky and handed them over to zoos worldwide. Only forty-five years later, only two groups of the horses remained: one in Munich and one in Prague; the others had all died from old age and illness. The most valuable herd of horses were cruelly slaughtered by the Nazi soldiers during the Second World War occupation of the Ukraine. By 1969 the wild population had become completely extinct.

The entirety of the world population of Przewalski’s Horses is descended from nine of the thirty-one creatures that were in captivity in 1945. In the 1970s, a program led by the Zoological Society of London and a group of Mongolian scientists was started that aimed to reintroduced the horses into their natural habitat. The first herd of sixteen horses were successfully released into the Mongolian wilderness in 1992. As of 2005 there were 1 500 horses worldwide, in both captivity and the wild; in 2011 it was believed that there were 300 roaming free.

Przewalski’s Horses look remarkably different to the domesticated equines with which we are so familiar. They are short and stocky with features that could almost be described as primitive. As a rule of thumb they are usually are usually dun in colour, with black, shaded markings on their legs and spiky manes. They stand between 12-13hh high and weigh around 300kgs. Their natural habitat is the Central Asian steppes, namely Mongolia, and their behaviour is a lot like that of the feral and semi-feral horses, such as the Mustang and the Camargue.

Return to Home
from Przewalski’s Horse