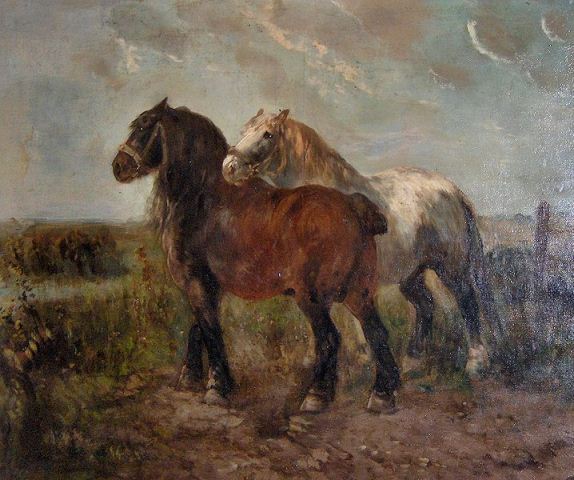 The Belgian Draught horse is a historic breed, closely related to the Ardennais Horse from the French-Belgian border. It is also known by its earlier name, the Brabant, although this usage is not entirely correct (see further down).

In Europe during the Middle Ages, there was a breed known as the Flanders Horse from which the modern-day Belgian Draught was developed. The Flanders Horse was also essential in the improvement of several other Cold Blood Horses, such as the magnificent British Shire, the chestnut Suffolk Punch and the long-legged Scot, the Clydesdale.

Nearing the conclusion of the previous century, there were actually three recognized variations of the Belgian Draught; they all were classified as the same breed of horse, but they had different bloodlines that each can be traced back to an individual stallion. The first category, the Gros de la Dendre, came from the stallion Orange I; they were predominantly bay in colour. Another line, the Colosses de la Mehaigne, also came from a bay stallion, Jean I. The final group, the Gris du Hainaut, was composed mainly of greys, red-roans and sorrels, and was founded by the stallion Bayard.

Until the dawn of the 1940s, the Brabant and the Belgian Draught were one and the same; the Brabant derived its title from its main region of breeding, found in central Belgium. After the Second World War, however, the Brabant horses in Europe were specifically bred to be heavier and thicker-bodied. On the other hand, in the United States of America the Belgian Draught was bred to be taller and slighter than its eastern counterpart. That is why in the present day the names ‘Belgian Draught horse’ and ‘Brabant’ cannot be used interchangeably.

Today a rather insignificant population of Belgian Draught horses can be found in its country of origin; the majority of the breed is located in the United States of America, largely due to the bulk imports of Belgian Draught horses to the USA prior to World War II, a successful attempt to save the breed from devastation. In some remote places which are relatively untouched by mechanization it is still used as a farm horse as in the days of old.

Unfortunately, the modern Belgian Draught is prone to several horrible diseases. Junctional Epidermolysis Bullosa (or JEB) is an inherited genetic illness which causes new-born foals to lose large patches of skin and suffer other abnormalities; the only option is to have such foals put down. Belgian Draughts also are known to be at risk for chronic progressive lymphedema; this is a chronic progressive disorder which can be identified by progressive swelling, hyperkeratosis and fibrosis of distal limbs.

A tall and powerful horse, the Belgian Draught stands between 16.2-17hh and comes in the colours of red roan, chestnut, sorrel, bay, dun and grey. Even though in most places it will not be used for farm work, many breeders still hold to the tradition of docking the tails of their horses, a practice which used to prevent the Belgian Draught horses’ hair from becoming painfully tangled in the machinery they pulled.