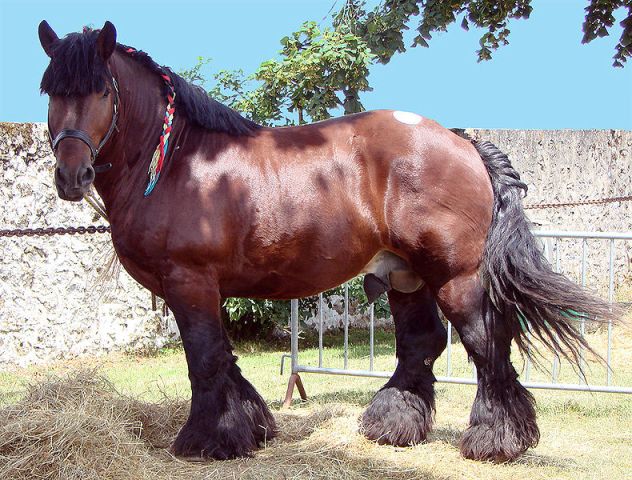 The Ardennais horse was originally rather small as far as draught horses go. It was used for not only draught work but for riding as well, unlike many other heavy Cold Blood horses. It is a very docile breed, getting its name from the mountainous home on the French-Belgian border.

Interestingly, ancient writings from over 2 000 years ago penned by none other than the Greek historian Herodotus and the legendary Roman Emperor Julius Caesar were discovered; both of these immemorial legends extoled the stamina and hardiness of a breed of horsefound in eastern France (then known as northern Gaul). Later on, equine skeletons were unearthed in the region that both Caesar and Herodotus mentioned; they would have stood around 15hh, making those deceased horses the likely ancestors of the modern Ardennais.

During the early 1800s Arabian, Thoroughbred, Percheron and Boulonnais blood was introduced to the breed; however these efforts were unsuccessful and eventually abandoned.

The Ardennais was priceless to the military during the Revolution in the reign of the Empire and the hapless Russian campaign due to its stamina and great reserves of energy. It was also one of the breeds of horsethat shared in the horrors of the First World War, as it served as an artillery horse on the battlefields.

The heftier, modern version of the Ardennais was developed due to the demands of arduous agricultural and heavy draught work. Today three versions of the breed exist: the original, smaller Ardennais, and two fuller branches called the Auxois and the Ardennais du Nord (previously called the Trait du Nord); the larger kinds came as a result of crossing with Belgian Draught horses.

The Ardennais horse stands at about 15 hands to 16 hands – not too tall for a Cold Blood horse, but not short either. It comes in a variety of exciting colours, including roan, iron grey, red roan, dark or liver chestnut and bay; bay-brown, palomino and light chestnut are permissible, but black, dappled grey and any other colours are not allowed.

Return to Home
from Ardennais Horse