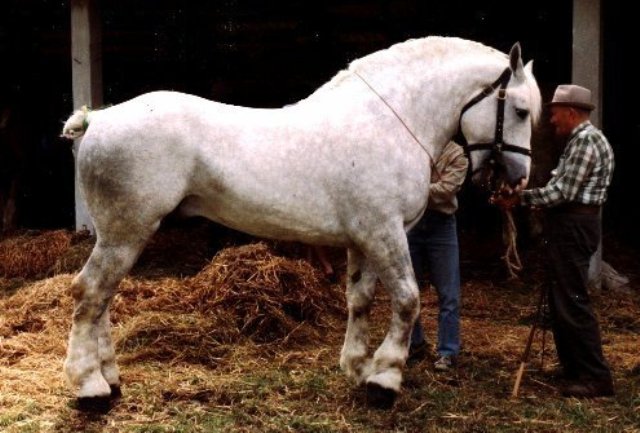 With its origins to be found in the ages dominated by the Roman Empire, the Boulonnais horse is possibly the most graceful of all the Cold Blood Horses; its name is not as ancient as its history, dating back to the seventeenth century when it was derived from its main region of breeding in north-west France. It was heavily influenced by Arabian blood, starting with the arrival of the Roman troops on the French coast before they crossed the Channel to invade Britain.

The actual development of the breed only really began during the seventeenth century. After the Crusades, the returning knights brought oriental horses back to Europe with them after their wars in the east. During this time period there were also two noblemen (Robert, Comte d’Artois, and Eustache, Comte de Boulogne) who were intent on creating a strong, agile warhorse for French knights to be mounted upon; these horses would have to be heftier in order to cope with the additional weight of knights wearing the new plated armour. To achieve this, Robert and Eustache imported German Mecklenburg mares to be crossed with French stallions, thus forming the basis of the modern-day Boulonnais.

When the Spanish occupied Flanders during the seventeenth century, they brought with them Arabian, Barb and Andalusian horses which were bred with the existing Boulonnais horses; the results of this venture were what created the Boulonnais of the present day. Later on in the 1800s, many suggested that Arabians and Thoroughbreds be crossed with the Boulonnais horses to create a lighter cavalry horse, but these proposals were rejected as the breeders feared that they would cause the loss of the Boulonnais’ size.

World War I and II nearly caused the tragic demise of the Boulonnais horse; the breeding grounds of the breed were situated right in the centre of the conflict. After the Second World War the rapid spread of mechanization pretty much signed by the breed’s death warrant, but the efforts of a small number of enthusiasts prevented the Boulonnais’ extinction. Even today it survives in diminished numbers, the American Boulonnais Horse Association estimating that there are only 1 000 horses in all of Europe.

Though unfortunately the one of the main outlets for Boulonnais breeders is the horse meat trade, these majestic equines can still be seen working the land on French farms today. There are actually two variations of the breed, the first being a heavier type which was used for agricultural and industrial purposes; today it is favoured by the horse meat trade. The smaller type was also used for light farming work, but it was known as the Mareyeur (‘fish merchant’ in French) as its primary job was to transport fish from Boulogne to Paris.

A medium-sized breed, the Boulonnais stands between 15.3-16.3hh. Its coat varies within the many beautiful shades of grey, although according to the French registry for the breed the colours of chestnut and black are acceptable too. The Boulonnais was used in the past for the development and improvement of various breeds, including the Selle Francais, the Italian Heavy Draught, the Schleswig and the Ardennais.

Return to Home
from Boulonnais Horse