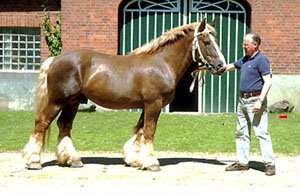 The Schleswig horse  a sturdy, compact animal  comes from the northern-most region of Germany, Schleswig-Holstein. This
place borders Denmark and was often part of it in various times of its history. I guess it is not so strange that the
Schleswig bears the very obvious stamp of the Jutland, the Danish breed which the Schleswig is related.

The Schleswig was created during the second half of the nineteenth century. At that time, it was a medium-sized
draught horse. Infusions of lighter blood from breeds like the Yorkshire Coach Horse and Thoroughbred were made towards
the end of the century. However, these infusions had no lasting effect on the breed.

The Schleswig horse was popular for use as a tram and bus horse, for farming and for forestry. The breed survived WWI  at
which time its homeland was under Danish rule  although its numbers were seriously depleted, as was its quality.

To get the Schleswig back up to its former standard, introductions of Breton and Boulonnais blood from France took
place. The Schleswig recovered and bloomed in large numbers until the years following WWII. In that time, mechanization
took its toll on the Schleswig as it has on many other breeds and its numbers dwindled drastically.

Recently, the surviving Schleswig have been re-bred to Jutland horses to increase their size. Now, the horses weigh
in at about 800kgs. They come in the colours of chestnut grey and bay and stand 15.2 t 16 hands.

Return to Home
from Schleswig Horse