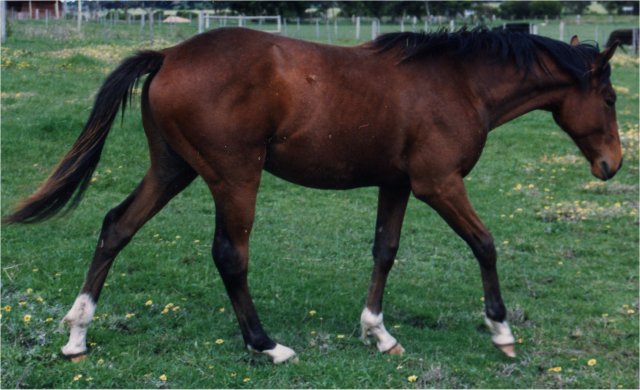 The Australian Stock Horse is not an indigenous creature of Australia; it is actually a breed which is descended from the nine original horses which landed in Botany Bay in 1788. Other early imports from South Africa included Arabians, Barbs and Thoroughbreds as well as a breed known as the Cape of Good Hope Horse which was mostly of Andalusian ancestry.

The breeders of this horse were ruthless in their selection. Only the sturdier horses which displayed outstanding stamina were allowed to live; all weaker animals were culled so that the breed would be strong. In addition to more development with Thoroughbred stock, inserts of American Quarter Horse blood were added in the mid-nineteenth century. The Thoroughbreds in particular were popular as there was a steadily growing interest in horseracing among the Australian locals and only the pace of this renowned breed with its unmatched racing pedigree could satisfy this demand.

The Waler horse (named after New South Wales) is akin to the Australian Stock Horse as they share similar roots, although today the latter is of a smaller size than its relation. This is most likely due to the fact that during the First World War the Australian horses were specifically bred to be larger than the modern horses as they were expected to carry full-grown men with great loads of heavy military kit required by the cavalry. To achieve this, crosses with the heftier Clydesdale and Suffolk Punch were made.

This horse was formally recognized as a proper breedof horse when the Australian Stock Horse Society was created in 1971. Today there are around 170 000 individual horses registered with the society. The modern breed is a very versatile creature, being competent in polo, dressage, show jumping, eventing and endurance riding. Certain horses have enjoyed immense recognition for their international sporting abilities, Regal Realm being one of them. In 1982 he won the individual gold medal at the World Three-Day Event Championship and two years later at the Los Angeles Olympic Games he won the team silver medal as well as finishing a spectacular individual sixth place.

Most of these horses will stand between 15-16.3hh, definitely taking after its Thoroughbred ancestors in height. Though this breed has the potential to be a successful athlete, it can easily function as a general riding horse and is still used for work as round-up horses on cattle stations in remote, mountainous areas were mechanical means of transport cannot function. All colours are considered to be acceptable, though some prefer not to have spotted, golden and white horses.